The muscles used to clean a weight from the floor.

Every time the body is moved—every time you clean a weight from the floor, for example—that movement can be described. If you raise your arm in front of your torso until it’s parallel to the ground, you could describe that movement as a forward arm raise. But it could also be described as shoulder flexion. Physicians and other medical professionals use the term ‘shoulder flexion,’ and dozens of others like it, to describe all anatomical movements. It’s like a special language used to describe movements in the body.

Each anatomical movement is caused by some set of muscles. For example, the biceps brachii, brachialis, brachioradialis, and pronator teres cause elbow flexion (which is another anatomical term). No matter who is doing it, if the elbow flexes, those muscles are involved. To know the anatomical movements involved in any exercise is also to know the muscles likely at work during that exercise.

Most lifters will use about nine different anatomical movements to clean a weight from the floor. Note that any given exerciser may do a set of movements that are somewhat different than that number. And different exercisers may use the same muscles to different degrees. That said, about 45 different muscles contract during a clean. They are listed below.

Muscles used to clean a weight 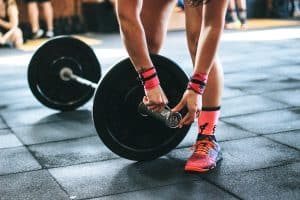 When a lifter squats down to clean a weight from the floor, she appears to be doing a simple-looking exercise. But it’s actually a complex movement involving many muscles. The clean is a good way to develop bio-motor abilities, most especially power. It’s best to start doing this lift under a coach’s supervision. Find a personal trainer that you trust and book some time.