It has long been understood that one should do a variety of exercises, beyond the bench press, if he wants to bench press heavier weights. A similar idea is understood for just about every sport. Which is why track racers lift weights, baseball pitchers run distance, and swimmers do dry land exercises.

But which exercises will lead to a bigger bench? The best answer will come from practitioners of the sport.

The bench press is a discipline in a sport called Powerlifting. It’s an international sport with its own federation and championships. Athletes have been competing for generations. They, along with coaches, have had that much time to figure out what works.

Bench press competitors, also called powerlifters, seem to have these priorities in common: general preparation followed by the development of muscle mass, maximum strength, and speed-strength. It’s common for them to allocate some number of weeks towards the development of each one of those things.

Push-ups are a preparatory exercise for the bench press 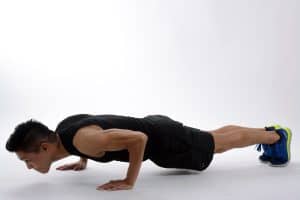 Powerlifting coaches sometimes recommend that powerlifters do push-ups during the general preparation period. Dan Austin and Bryan Mann, in their book “Powerlifting,” state: “If you can’t do push-ups, you shouldn’t start benching.”

But it is uncommon for pushups to be used to develop a powerlifter’s maximum strength, muscle mass or power.

So, the push-up is used to qualify powerlifters for the bench press, or else to help prepare them for their strength programs’ upcoming phases. Beyond that, push-ups are not a standard feature in the training of powerlifters.

Maximum strength, muscle mass, and speed-strength are typically developed by way of a variety of exercises—different types of bench-pressing, exercises using boards and bands and chains, exercises for the triceps and back and shoulders—but not push-ups.