How a physio ball can help strengthen the core.

In comparison to the ground, the physio ball can be a challenging surface on which to perform core exercises.

A physio ball is a labile surface 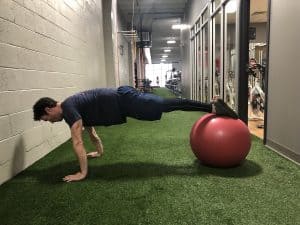 Doing any exercise on a labile surface makes the exercise harder. You’ll have to do the exercise while keeping yourself from falling off the ball. For those who remember playing ‘jacks’ as a kid, it’s like you’re picking up two jacks instead of one.

Try doing a crunch suspended in the air 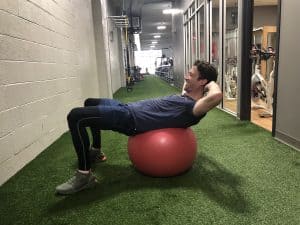 Physio balls, depending on their placement, can hold some part of your body in space. When there is no support for some part of the body, you will normally have to use muscular strength just to hold that part up. Those muscles never stop working as long as you stay in the position.

Here’s an example. Imagine sitting on a physio ball, then roll down the ball and stop when it is under your mid back. In this position, part of your torso, both arms, and head will be in the air. The only way to keep those parts from falling back is to activate the abdominal muscles. This means that those muscles are working even before the exercise starts! Once the exercising begins—let’s say you’re doing a crunch—there is no rest. Done properly, and it’s best to work one-on-one to learn how to do it effectively, the physio ball crunch is one of the most demanding types of crunch.