Why kettlebells are so effective

When an exerciser swings a kettlebell, at least two things will happen: he will burn a lot of calories and his muscles will have to contract rapidly even as they lengthen.

What kinesiology shows us about kettlebells

Let’s compare holding a 15-pound kettlebell by the spherical part and by the handle.

A ball grip would be used to hold the sphere. A ball grip is a kind of a powerful grasp, but one with limited finger flexion. The degree of finger flexion would limit the amount of acceleration, beyond which the kettlebell would slip out of the grip. 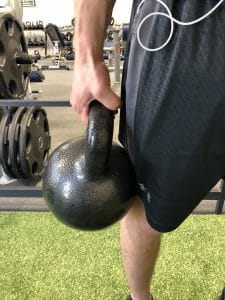 The hook grip, which is another example of a powerful grasp, uses more finger flexion and so is more powerful than a ball grip. A hook grip is used to hold the kettlebell resting at your side.

It is in common for a person to use a fist grip when exercising with the kettlebell. The fist grip is the most powerful of all the powerful grasps because it allows for maximum degrees of finger flexion and, hence, the highest levels of grip force. 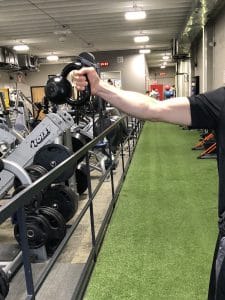 A very powerful grasp allows kettlebells to be swung without limitation.

Swinging kettlebells place many muscles under constant tension until the swinging stops. So it is no surprise that the exercise burns a lot of calories. An average sized man in the US will burn about 17 calories each minute that he swings a kettlebell.

Kettlebells can be swung with one or two hands and in many different directions. As the arm approaches the end of its range of motion, the kettlebell must be decelerated and stopped. And that must happen very rapidly. To do this, the muscles must perform an impressive feat: they must contract even while being stretched. That’s called an eccentric contraction. That’s the strongest contraction the muscles are capable of, so powerful that they are believed to be the cause of delayed onset muscle soreness.

That combination of high caloric expenditure plus strong muscular contractions makes kettlebell swinging an effective way to achieve a number of objectives.

Find a personal trainer that you trust and learn how to swing kettlebells.